We are very honored to support and collaborate with New Voices, America's only national magazine written and published by and for Jewish college students! 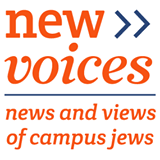 Published since 1991 by the independent, non-profit, student-run Jewish Student Press Service, New Voices is America’s only national magazine written and published by and for Jewish college students.

With New Voices, the Press Service continues its tradition of cultivating the next generation of Jewish journalists, creating a Jewish media that speaks to young Jews, and empowering Jewish students to take ownership of their heritage. The magazine is produced by one straight-outta-college staff member in New York and a network of student writers, bloggers and editors from campuses across the country on a shoestring annual budget.

With web traffic that fluctuates between 12,000 and 15,000 viewers per month, New Voices is the online destination for Jewish college students — especially the leaders and taste-makers of the Jewish campus community — as well as the professionals who work closely with them.

Do you want to read inspiring blogs, get involved, advertise or be part of the only national magazine written by and for Jewish college students, and the next generation of Jewish journalists? Now you can!
To learn more: New Voices Official Website