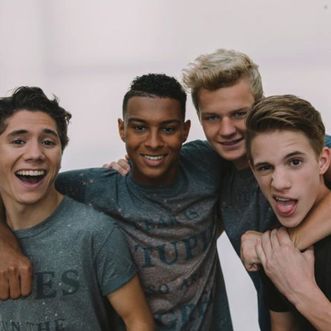 Thank you so much for this interview. It is a real pleasure to have you here. You’re MainStreet and your music is loved by people from all over the world. You’re very busy and soon you’ll be on tour and this is very exciting. Nils, Owen, Daan and Rein, can you tell us something more about you?
Nils: We are a Dutch popgroup and we are all about 16/17 years old. We’ve been together for about four years now and we have just released our third (mini) album which entered at number one in the charts here.

You’ve performed many songs and one of them is “Dear Kitty” (Song For Anne). Can you tell us more about it?
Daan: “Dear Kitty” (Song For Anne) is on our latest album. It’s a very special song with an important message. We were asked to perform at a theater in Amsterdam where the play about Anne Frank has been running for a year. It’s a great play with an amazing set. Since Anne Frank was about the same age as we are now and most of our fans, we thought this would be a great match. We also heard that she loved to listen to music so what better way to honor her and her diary?
Who wrote the song?
Rein: We sat down with our producers, Future Presidents. And we helped to come up with the concept of the song. We wanted to speak directly to Kitty just like Anne did as if Kitty was a real person.
The lyrics are very beautiful and touching. Which is your favorite part of the “Dear Kitty” (Song For Anne) and why?
Owen: That’s a tough one.. I like all of the lyrics. Maybe the part where Daan sings: “Dear Kitty, Where do we go? When you run from who you are and lose everyone you know…”
Because she had to run from being herself (being jewish) and had to leave her life and friends behind. I visited Auschwitz for the METRO newspaper and wrote an article about my experience. The first line of the song talks about the war: “Dear Kitty, what have they done? When so many lives are lost how can a war be won?”.
Where can people purchase “Dear Kitty” (Song For Anne)?
Nils: We never intend to make money with this song. It is available on iTunes, but you can also listen to it for free on YouTube or Spotify. We just wanna help spread the word.
As you know, through our organization, on June 12nd we’ll launch the project “Cara Kitty” (Dear Kitty). In the past months we have encouraged people from all over Italy to send us their thoughts and or reviews of The Diary of Anne Frank and they we’ll be published on our official website. Why do you think that The Diary of Anne Frank is so important?
Daan: I think it’s important to keep telling the story. Because we can take freedom for granted very easily and it wasn’t always as good as we have it now. And Anne Frank was a teenager so it speaks more to kids aswell I think. It should never happen again, so it’s always important everyone knows what happened in World War 2. 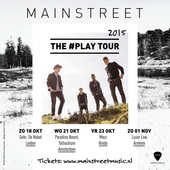 Surely we’d love to have you here in Italy. Are you planning a concert in our Country too?
Owen: That would be really cool! But our fanbase is mostly in The Netherlands and Belgium. We have some Polish and Danish fans that come all the way to our shows here. If there are enough fans in Italy for a show than we will go there.

What are you working on right now?
Nils: Me and Owen are in the middle of our exams haha so at the moment we are busy with school. In June we will be promoting the new album and a new single and doing some instores aswell as some festivals. We also just announced a new tour for October so we will start rehearsing for that soon and work on new songs.
Our organization uses the story of Anne Frank to promote peace and acceptance and to encourage others to embrace better attitudes. Our activities seek to strengthen the values of freedom and equality, and to combat Antisemitism, racism, injustice, prejudice and discrimination. Can you leave a message to our supporters?
Rein: Always treat everybody the way you like to be treated. That’s the easiest and best way to get along I think. Last year we recorded a song about bullying called ‘Dreamers’, because a lot of kids still get bullied and they write us fanletters with heartbreaking stories. We also have an online forum called ‘DreamersForum’ where anyone with a problem can go and get help. We have noticed that there is still racism aswell which is very sad. We even went to schools to talk about these problems.
Is there anything you’d like to share with us but that we didn’t ask you (your motto…)?
Daan: We don’t really have a motto, but between the songs about falling in and out of love we think it’s important to have a couple of songs with a deeper meaning like Dear Kitty.
Thank you so much for your precious answers and keep doing the wonderful and important music you’re doing.
All: You’re welcome and thank you aswell!