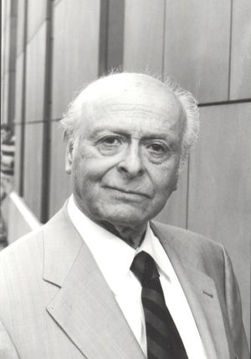 Buddy Elias, Anne Frank's cousin, supported our charity and it's our true honor. It's with a lot of sadness that we announce that Buddy passed away on March 16, 2015.

"Buddy is a wonderful person, and the same goes for his wife, Gerti.
The day I sent an email to Buddy and Gerti to let them know about BRIDGE to ANNE FRANK, Buddy answered me back and he wrote;
"We are very happy and grateful to you. It's wonderful that you want to dedicate a website to the Holocaust and its victims".

Of course I am grateful to them for their support. It's a new way to feel closer to the Franks, to a family that touched my heart, to a family that has lost so much, but that is giving back twice.
Buddy and Gerti are really doing all they can to make sure no one forgets Otto, Edith, Margot and Anne, the Holocaust, its victims and survivors and to improve our world. Despite their daily lives, they decided to spend their time talking about the Frank family and the diary of their beloved Anne. They also go to schools to talk about the Holocaust, Anne's ideals and to give readings about their book Anne Frank's Family.  A book based on more than 6000 newly discovered letters, documents and photos all found by Buddy and Gerti in a trunk in Helene Elias's (Anne's aunt and Buddy's mother) attic.
A book that took my breath away and that I suggest everyone to read. - Sofia Domino, October 2014. 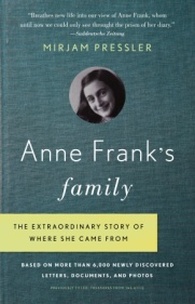 Description:
This fascinating history of Anne Frank and the family that shaped her is based on a treasure trove of thousands of letters, poems, drawings, postcards, and photos recently discovered by her last surviving close relative, Buddy Elias, and his wife, Gerti.
As children, Anne and her cousin Buddy were very close; he affectionately dubbed her “the Rascal” and they visited and corresponded frequently. Years later, Buddy inherited their grandmother’s papers, stored unseen in an attic for decades. These invaluable new materials bring a lost world to life and tell a moving saga of a far-flung but close-knit family divided by unimaginable tragedy. We see Anne’s father surviving the Holocaust and searching for his daughters, finally receiving a wrenching account of their last months. We see the relatives in Switzerland waiting anxiously for news during the war and share their experiences of reunion and grief afterwards—and their astonishment as Anne’s diary becomes a worldwide phenomenon. Anne Frank’s Family is the story of a remarkable Jewish family that will move readers everywhere.
Pages: 416

You can purchase the book in every bookstore.