Anne Frank is the voice of all the victims of the Holocaust.

She was born on June 12, 1929 in Frankfurt, Germany, and was the second daughter of Otto Frank and Edith Frank - Holländer. Margot, her older sister, was three years older.

Anne lived four years in Frankfurt, but when Adolf Hitler and the Nazis came to power, like many other Jews the Franks decided to flee to Amsterdam to feel safe again. There, Otto set up a business.

By May 1940 Nazis had occupied the Netherlands, and on July 1942 the Franks went into hiding, in what is now referred to as the “Secret Annex”. It was in a specially prepared place in the building owned by Otto Frank’s company. The Franks hid out for two years, along with four other Jews. During that time Anne kept writing in her diary.

The last entry being on Tuesday, August 1, 1944. A few days later, after an unknown informant alert, the Gestapo (the Nazi secret police) discovered the “Secret Annex” and arrested all the people in hiding.

The Frank family and the others were taken to Gestapo headquarters in Amsterdam. Two days later they were transported to the Westerbork transit camp and then to the Auschwitz concentration camp. Edith died in Auschwitz, while Anne and Margot perished in Bergen – Belsen concentration camp.

Otto Frank was the only member of his family to survive the Holocaust.

The diary of Anne Frank was published in 1947 and it has been translated into more than 70 languages. Now it’s one of the most poignant and memorable records of the Holocaust.

Her diary has inspired millions of people all over the world and has become a symbol representing all victims of racism, anti – Semitism and fascism.

Not only did many of the messages contained in Anne Frank’s diary encourage others to combat all forms of racism and intolerance, and give readers an insight into what it was like to live during the World War II as a Jew, forced to go into hiding and to live under extreme circumstances, but the diary also shows Anne struggling with the universal problem of growing up.

The story of Anne Frank and her profound thoughts still brings hope everywhere.

I recently had the honor to interview Buddy Elias, the closest cousin of Anne Frank as well as her last living direct relative.

The first time I contacted Buddy via email I thought I would receive an answer from a kind, special man.

But Buddy Elias is much more than that. With every word he says he inspires me, and from the beginning of our communication I felt that Buddy is a lively man, with a great sense of humor and with a big heart full of love. Now, every time I think about Buddy Elias, I think about kindness, respect and, of course, hope.

Buddy Elias is the stage name of Bernhard Elias, born in 1925 in Frankfurt am main, Germany. From 1947 to 1961 he was resident comedian for the “Holiday on Ice” revue. Along with numerous appearances on stage, Buddy also worked as an actor for more than 80 films and TV programs.

Sometimes he still works as an actor, but he mostly spends his time talking about his cousin Anne Frank and all the victims of the Holocaust, to spread the world about their terrible destiny. He also works for Anne’s humanist ideals, doing everything he can to talk about peace and to fight against any form of discrimination. 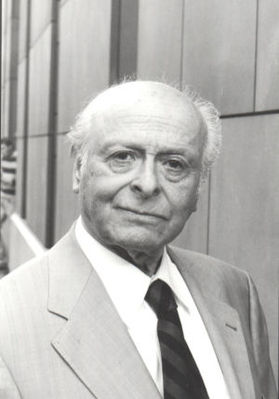 Thank you so much for having accepted to do this interview, it's a real honor for me to have you here. Can you tell us something about you?

«I am 89 years old now, but my health is good, except hearing problems. I have two children and five grandchildren, and they all live in Germany. I do Yoga every morning and sometimes I still work as an actor, but the most important thing in my life is to work in the ideals of my cousin Anne Frank. Together with my wife, Gerti, we give lectures and talks about Anne and the Holocaust. We mostly visit schools and read out of our family history book.»

(“Anne Frank’s Family” by German writer Mirjam Pressler, which has been translated into eight languages. Gerti Elias has co – authored the book.)

What did you like to do when you were a child?

«I loved ice skating and I became a professional comedian and jazz dancer on ice. I have performed for fourteen years and I traveled a lot. I also performed in Milan, Turin and Rome.»

What was it like growing up during the war and what scared you the most?

«During the war I lived in Basel, Switzerland, with my family and my grandmothers as well as an uncle who left France escaping from the Nazis. My hometown Basel is only minutes away from Germany and France, so we were daily afraid of a German invasion.»

In many past interviews you said you had a lot in common with your cousin Anne Frank and, correct me if I’m wrong, one of the last memories you have about her is when she told you to dress up like your grandmother, Otto Frank’s and your mother’s mother, to wear a hat and high heeled shoes and to imitate her. She loved theatre and that day she had a lot of fun with you. Tell us another remembrance you have about Anne, something you’ll never forget…

«Yes, Anne loved to dress up and to imagine she was an actress. We also played games like other children. She was clever at “hide and seek”, always finding places where I could not find her. Especially when we were on vacation in the mountains before they went into hiding. We were very fond of each other. Margot was not so playful. She was a reader, but also a lovely girl. Otto Frank always said: “The whole world talks about Anne and nobody about Margot.” That made him sad.»

In 1929 your father became a representative of a German company in Basel, and in 1931 you and your mother joined him. The Franks then fled to Amsterdam but until the Wehrmacht (Germany’s World Word II army) they used to travel regularly to Switzerland. After that, Anne kept in touch with you writing letters. What did she talk about in her letters?

«She wrote us very often and she sent us letters telling us all about her life, about school, her friends, her activities etc…»

How have you discovered Otto, Edith, Margot and Anne went into hiding?

«When Margot received the notice to report the next day for transport to a “work camp in Germany”, they wrote a last postcard to us, saying we would have to understand that they could not correspond with us anymore. We then realized that they went into hiding. But we had no idea where they were hiding… Then for two years we had not contact at all.»

What can you tell us about the relationship between Anne and Margot?

«The relationship between Anne and Margot was good. Differences were natural like with other sisters or brothers. But they had different personalities. Anne was lively and Margot was more quiet. Anne was more Otto’s child and Margot more Edith’s child.»

Many children during the Holocaust wrote diaries and I respect all of them. Anne is the voice of all the victims of the Holocaust because many people, thanks to the diary of Anne Frank, learned what the Holocaust was, learned about discrimination and because of that are more interested in humanitarian issues. For example, in her diary Anne had taken a stand for the rights for women, she hoped that one day people could live in peace, no matter what religion, color of the skin or nationality…

Some of my favorite quotes from her diary are:

- “How wonderful that nobody need wait a single moment before starting to improve the world.”

- “I don’t think of all the misery, but of the beauty that still remains.”

- “It's really a wonder that I haven't dropped all my ideals, because they seem so absurd and impossible to carry out. Yet I keep them, because in spite of everything, I still believe that people are really good at heart.”

What are your favorites?

«That is difficult to say. One is:

“Once we will be human beings again and not just Jews.”

An another one is:

“How wonderful that nobody need wait a single moment, before starting to improve the world.”»

In her diary Anne wrote about you. How did you feel the first time you read it?

«I was moved to tears when the diary was published in German at the beginning of the 50th and to read what she wrote about me.»

The Franks lived in the “Secret Annex” for over two years before they were betrayed and sent to Nazi concentration camps. Otto was the only one to survive. Edith died of starvation in Auschwitz while Anne and Margot died in Bergen – Belsen during a typhus epidemic. How did you feel when, later, you discovered what happened to them?

«You can imagine. I was heartbroken.»

Thank you so much for your precious answers. Here is my last question: since 1996 you’re the president of the Anne Frank Fonds, in Basel. Can you tell us more about it?

«Thank you very much to you for your interest and dedication to honor the victims of the Holocaust, especially Anne.

Sure, The Anne Frank Fonds has been founded by Otto Frank, and I became its president after his passing. All income from book sales and from anything else concerning Anne Frank is used for a wide range of charitable and educational projects, especially for children in need.»
The ANNE FRANK FONDS (AFF) is a foundation under Swiss law domiciled in Basel. It was established by Otto Frank on January 24, 1963. The purpose of the foundation is to promote charitable works and to play a social and cultural role in the spirit of Anne Frank.